Overlong and outdated, this story is interesting to read because it was, and is, so influential on politics and – to a lesser extent – on organisational leadership, but it doesn’t really stand up on any other basis.

It starts quite well. It’s well-written and I enjoyed the early chapters about the challenges of running a railroad in 1950s America. However, the story soon deteriorates into a nonsense argument between the heroic industrialists who are talented and achievement-orientated, and the fake straw men who are spineless, stupid and corrupt.

The philosophical premise that informs this (and Rand’s theory of Objectivism) is so damn clumsy it gets quite infuriating.

The central argument is so simplistic and loaded it insults the intelligence. The good guys are hard-nosed, hard-working, focussed, and clever. They unashamedly make money and don’t apologise for it. So far so good; no problem with that. What they go on to do is reject most human relationships as unnecessary – Dagny Taggart, the most human of the “good guys” (who I quite fancied), at least admits she needs butch and uptight Hank Rearden in her bed and doesn’t mind saying so – Rearden, who needs a good slap if you ask me, insists (and insists!) that he’s only doing Taggart for his own pleasure and does not give a jot for hers. This seems very important to him. She sees this as a good thing. 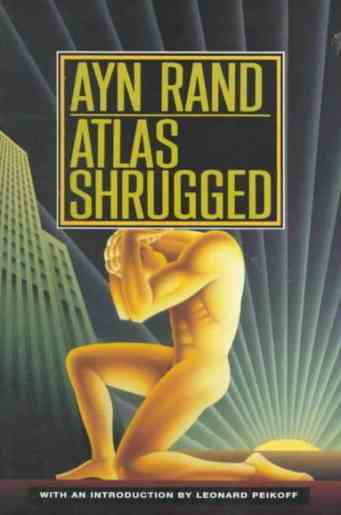 What I like a lot is when Taggart says that Rearden went up in her estimation when she realised that he wanted her. She saw that wanting her was something to admire in another person, like getting her, understanding her, was a compliment to them, not to her. That’s a wonderful attitude. I love that.

The “bad guys” are only interested in the greater good not their own selfish needs. This is an interesting twist to make concern for others and society into “evil” and concern for personal gain into “good”. The dichotomy is far too simplistic of course – things are rarely so black and white and good and evil are not directly linked to these two schools of thought, they – such as they exist – can be in equal measures spread across both. Rand’s bad guys are all two-faced doublespeakers, not a backbone between them. They are corrupt, they lie, they are “looters”. It is quite feasible to be concerned with the good of society and not be corrupt and incompetent. This is just silly. What a pity she didn’t put up a real argument from a real character instead of a bunch of blowaway straw men.

Rand’s theory of Objectivism is based on the idea that the important thing is the “objective world”, not our subjective experience of it, and therefore hard facts trump feelings and emotions (i.e. our response to our environment). She argues that we should respond and work within the reality of objective facts and not subjective emotion.

This is useful for leadership and decision-making as far too many people in positions of power and influence wrongly conflate the two things, mistakenly thinking their view is objective reality, that they see and say the truth. This tendency for over-confidence effect is thought to be stronger the more self-confident we are in general, a trait common with leadership.

From this reasonable foundation (objectivism) she goes on to argue that the human experience is an individual one, we are all islands and need to define our own purpose and will only achieve happiness through selfishly pursuing our own self-interest, ergo this is the moral course of action. This concept regards any limit on an individual’s ability to pursue that self-interest as a bad thing and therefore concludes that the only moral government is the smallest possible government.

Ayn Rand tends to bring out the worst in people – her followers are loyal to the point of blindness, this being at least partly because of Rand’s insistence on the necessity to buy the whole package and agree with her on everything, or not at all. No half-measures. Partly also because of the originality and persuasiveness of Rand’s writing, reading her is inspiring and can feel like a secret door into a superior world. Anti-Randers can be just as unreasonable, slinging insults and denying every last bit of Rand’s right-wing package because it’s right wing.

The thing is, for me, some of what Rand says makes sense, some doesn’t.

First, she’s wrong about the world.

There may or may not be an objective reality, but it’s irrelevant to the human experience as all we have is our subjective perception of it. Everything, and I mean everything, we are aware of is in our heads. In our heads is all we’ve got. We don’t reach outside of our body into the world and see things, we sense whatever light that bounces off the world that makes it inside and on to our retinas. Our brains then construct an error-strewn half-baked 2D image of our immediate 3D environment, adding in the sounds we perceive from those air molecules that happen to shake against our ear drums, and the smells from the few molecules that make it up our noses. We don’t experience an objective reality, we recreate our subjective perception of it within our own heads. Ignoring for the moment whether or not the experience of self is an illusion, the experience of being human is the experience of consciousness, the experience of watching our brain’s subjective incomplete flawed and heavily biased reconstruction of our environment.

Being human is subjective, it is an emotional experience. Rand essentially concludes that we must de-humanise ourselves, become Spock-like logicians, wedded to reason, above emotion.

As I said above, there is some value to this approach in decision-making and other professional situations (avoiding favouritism etc.), and I agree we need to understand and control our emotions and not be fickle slaves of our limbic systems, and that we need to master reason and logic, but we have to live our subjective emotional lives through our consciousnesses because that’s what being human is.

Second, I agree that we experience life as individuals. I agree that we need to define our lives and our own purpose as individuals and this is the only way we can really be happy, we must try not to be the needy recipients of the approval of others. Prescriptive solutions for what should make us happy from third parties, be that religion, government, school or whatever, are doomed to fail. We sail this ship alone and it’s our responsibility to do so – but, that said, we exist within context, we are part of our communities, our families and the teams we work in. Yes, we are individuals, perhaps heroic, dynamic, resourceful, hard-working individuals, but also inter-dependent individuals who enjoy being part of something bigger and who get pleasure (self-worth) from seeing others prosper.

I also believe in capitalism and taking responsibility, I don’t want a staid planned economy and un-dynamic market where no one is allowed to benefit from their own hard work and innovation. Equally, however, I believe that capitalism creates oligopoly and monopoly, which is just a commercial dictatorship and a failure of the system. It needs to be regulated, just like a wild wood does not flourish as well as a well-managed one. If we want the benefits of capitalism and open dynamic markets, we must accept and understand the drawbacks and manage them. We cannot expect self-regulation because that would put most organisations at a competitive disadvantage and game theory shows us that that would not be effective. It is the role and responsibility of government to provide good enabling regulation to allow for healthy and fair competition and ensure that the long-term needs of the people are the priority. Business is a means, the people are the ends.We have seen what happens when government intervention is rolled-back and unfettered pursuit of selfish ends is allowed to flourish unchecked. It doesn’t work. Bubbles burst, the heroic individuals of Rand’s story don’t tend to show up: the rich and greedy are just as corrupt (if not more so), they are just as dishonest, just as two-faced. Opportunity is not equal, the deserving are not necessarily rewarded any more than the rewarded are necessarily deserving.

We have also seen what happens when governments get too strong and try to decide what is and what is not in the best interests of everyone. They over-regulate, over-plan, take the wind from the sails through stodgy bureaucracy and ill-considered control. I’m not arguing in favour of some sort of socialism or planned economy, but every single real world example throughout history has shown that a balanced well-managed and cleverly regulated market system reaps the best and most sustainable rewards and has the best long-term benefits for business, the economy and most importantly the people.

There are some inspiring messages, and there are great chunks I really enjoyed – were it less dramatic, more realistic, fairer in its treatment of the central argument, less verbose and most of all shorter, it would be a much better experience.

In short, don’t use this as a template for your own leadership style, it won’t work!

View all posts by John Tomlinson

The copyright on everything in this website belongs to me. You can copy anything you want (unless stated otherwise) as long as you clearly attribute the source and provide a link to the original piece.